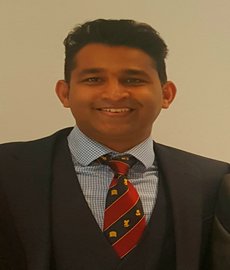 He graduated with honours in dentistry (BDS) in 2000 from Chennai, India, followed by a 3 year post graduate masters  degree in OMFS including a post graduate thesis in dentofacial deformity (2005).

He has always had a keen interest in teaching and education and is currently an honorary lecturer at RCS England and has been conferred the FDS Lectureship for teaching at the college for the last 15 years. He has organised and conducted multiple national level courses for Specialist Registrars In OMFS and taught at various national and international conferences. He has served as the Education and CPD rep for the BAOMS (British Association of Oral and Maxillofacial Surgeons) FiT Council and is an honorary surgical tutor at Oxford Medical School.